KEFRI Senior Deputy Director Research and Development Dr. Jane Njuguna on behalf of the CS Environment and Forestry presided over the launch of Model Fruity Schools project in Kenya which took place at Nairobi River Primary School on 19th June, 2021.

The Fruity Schools Africa is a project that aims to use the spaces in over 35,000 public schools that are currently underutilized by planting and caring for over 1,000,000 fruit trees. Children are by nature competitive, inquisitive and innovative. The project seeks to harness this great resource and engage them in forums that will build social skills, pass across life- long education on nutrition, environmental conservation and work ethic.


Mr. Kennedy Odoyo, Team Leader Fruity Schools Africa, thanked all stakeholders for making the project a success. “This project seeks to achieve two things; first to contribute towards the Government’s objective of achieving 10% tree cover by 2022 and secondly educate children from an early age the importance of environmental conservation,” he said.

In a statement read on his behalf, Dr. Julius Jwan PS Ministry of Education, pledged the Ministries support towards the project. He stated that the launch was just the beginning and the project will soon spread throughout the country. 237 primary schools in Nairobi are targeted to receive 41 grafted seedlings each.

Dr. Jane Njuguna delivered CS Tobikos remarks stating that the Ministry of Environment is keen to see the inclusion of schools in achieving improved tree cover in the country. She pointed out that KEFRI is ready to provide whatever expertise necessary especially for species site matching and value addition in the form of jams and juices. 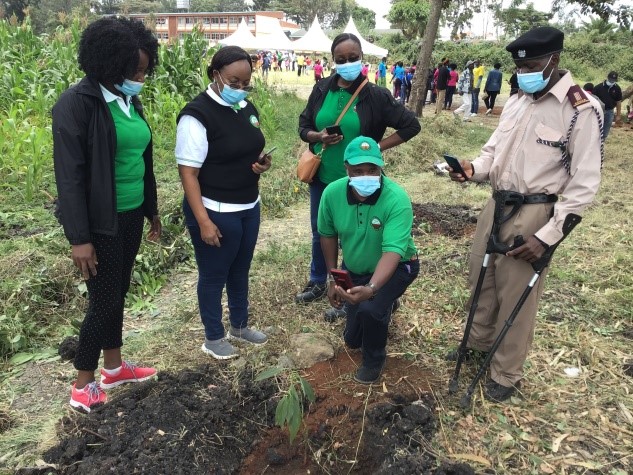 The event provided an opportunity for the KEFRI team to demonstrate the use of the recently launched KEFRIApp in recording the number of trees planted. 200 grafted avocadoes and 100 strawberry guavas were planted during the launch.

Ecosystem Restoration with the slogan Reimagine-Recreate-Restore.

The Cabinet Secretary, Ministry of Environment and Forestry Keriako Tobiko led Kenyans in marking World Environment Day at Garissa University, Garissa County. The theme for this year’s celebrations was Ecosystem Restoration with the slogan Reimagine-Recreate-Restore.


The CS kicked off the celebrations by unveiling recycle bins that were donated to the University by Petco Ltd. The bins were donated in a bid to educate students on the importance of segregation and proper disposal of waste. Petco assured the CS that the company would undertake collection of the waste and ensure that recycling is done.

Hon. Mohamed Hire, MP for Lagdera in his remarks pointed out that Garissa County has immense environmental potential which has been ignored and underutilized. He pointed out that the residents needed to appreciate that there are other economic activities they can occupy themselves with apart from charcoal burning and animal grazing. He urged the constituents to embrace environmental conservation and preservation activities.

He further reported that a policy is in the pipeline which seeks to encourage a paradigm shift from a linear to circular model in order for the public to view waste as wealth. The PS also pointed out that KEFRI has been supported to increase seed centers from 6 to 18 around the country with a view of producing 200 metric tonnes of seeds per year. Garissa is earmarked to receive 42.5 metric tonnes.

Speaking during the celebrations, CS Keriako Tobiko announced that the celebrations also marked the launch of the UN Decade on Eco-System Restoration 2021-2030. The program is designed as a global movement that can end poverty, hunger, malnutrition, gender inequality and the degradation of ecosystems by harnessing the power of nature and local communities.

The CS explained that Garissa University was chosen as the venue for this year’s World Environment Day celebrations in order to show the world that Kenyans are resilient despite the attack that took place at the University in 2015 where 148 students lost their lives. 1000 trees were planted next to the hostel in which the attack occurred in commemoration of the departed souls.